Fonds are to bond Europe for the time being. No (explicit) eurobonds. No (explicit) ECB direct financing. Instead a confusingly mutualising and de-mutualisng  cocktail of credits and debits will have to do as the momentary expression of mutuality. “Ist auch im Deutschen Interesse.” Angela Merkel assures her sceptical Sparbürger.   Schauen Sie hier die tagesschau

As to the politics and economics of Euro finance please read previous posts, deutsch or english.

…   “The German government has form when it comes to tolerating policies it rhetorically opposes,” said Puglierin. “The Karlsruhe ruling made something impossible for Germany that it had long tolerated […] There was a sudden pressure to come up with an alternative.” …

There is the  “…prospect of another euro stalemate, yet Grybauskaitė, a veteran of EU crisis summits, is confident there will be a compromise. She said there had been an important change since February, when leaders had failed to agree a seven-year budget. “Germany agreed to pay a large amount of money to save the European economy. That’s as simple as it is … How can you block it?”

Stubb, who served as his country’s finance minister during many bailout meetings, also expects a compromise that neither fully satisfies north, south or east, nor matches the original Franco-German proposal. For him, it’s a classic European story, following the arc of crisis, chaos and ending in “suboptimal solutions” – another messy end for a union that is neither the utopia of its admirers nor the dystopia of critics.

“This will be a good solution but of course it will be suboptimal because by definition that is what European decisions are.”

reuters    ECB prepares for the worst: life without the Bundesbank

“The frugals’ greatest fear is a permanent shift to deeper fiscal integration. The new fund is supposed to be temporary, and can only hope to mitigate the harm to ravaged economies. But establishing the principle that common challenges require common debt may ensure that next time the threshold for action is lower….”

skynews      David McWilliams: Central banks should give away ‘free money’

piie    Banking regulation in the euro area: Germany is different

reuters     Pushing back on German court, ECB more determined than ever

independent   A ruling that frays the ties that bind the EU

channelnewsasia        Coronabonds could be shield against legal challenges

Quillette   Italy and the EU: The Hard and Stony Road Ahead

LeMonde/T Piketty blog    “What should be done? In the first instance, realise that the Euro zone will remain fragile as long as it chooses to continue to submit its 19 interest rates to market speculation. Adopting the means to issue a joint debt with one and the same interest rate is a matter of urgency. Contrary to what one sometimes hears, the aim is primarily to mutualise the interest rate and not to force some countries to repay the debt of others.”

“European leaders have dodged their “moment of truth”. The Covid-19 emergency package averts an immediate crisis but fails to draw the political poison now threatening monetary union.   It has not cut Italy’s borrowing costs to bearable levels and is too little either to ensure the economic viability of southern Europe’s debt bloc or prevent the North-South divergence from spiraling out of control.  It leaves the European Central Bank holding the fort, compelled to cover to the exploding debt issuance of eurozone treasuries and to work overtime to stave off a run on Club Med bond markets. This places the institution in an invidious legal position. The vague agreement on Thursday night was billed as a compromise. EU veterans say that it was in reality a “German” outcome, repeating the pattern of the eurozone debt crisis …”

The Economist   After the disease, the debt

“Few subjects in economics attract more scaremongering than government borrowing. The national-debt clock ticking near Times Square in New York has warned of imminent fiscal Armageddon since 1989. In fact a country’s public debt is not like a household’s credit-card balance. When the national debt is owned by its citizens, a country in effect owes money to itself. Debt may be high, but what matters is the cost of servicing it and, as long as interest rates are low, this is still cheap. In 2019 America spent 1.8% of gdp on debt interest, less than it did 20 years ago. In 2019 Japan’s gross public debt was already almost 240% of gdp, but there were few signs that it could not be sustained. In countries that print their own money, central banks can hold down interest rates by buying bonds, as they have in recent weeks on an unprecedented scale (the Federal Reserve has bought more Treasuries in five weeks than were issued, on net, in the year to March). Just now there is no risk of inflation, particularly since oil prices have collapsed. Most economists worry less that governments will borrow recklessly, than that they will be too timid because of an irrational fear of rising public debt. Inadequate fiscal support today risks pushing the economy into a spiral of decline.

Yet while spending freely now to avoid a deeper slump is the only sensible path, wild borrowing for years would eventually threaten trouble. America has strong defences against an outright debt crisis, because the dollar is the world’s reserve currency and foreigners want to own its bonds. But other rich countries do not have that luxury. Italy’s towering debt and membership of the euro zone condemn it to live with the perennial threat of a financial panic should the ecb stop buying its bonds.”

Because the realisation of debt mountains ahead in the South have  “… raised what is euphemistically called “redenomination risk” – fears of defaults, financial crises and finally even exits from the euro zone. So spreads between the yield on Italian debt and the GDP-weighted euro zone average began to rise, helped along by an unfortunate remark of its president, Christine Lagarde, that it was not the ECB’s role to “close the spread”.

With its €750 billion Pandemic Emergency Purchase Programme, launched on March 18th, the ECB undid the harm. Isabel Schnabel, German member of the board, has laid out its rationale. The ECB, she explained, has two overarching objectives, “to restore the orderly functioning of euro area financial markets” and to ensure that “our accommodative monetary policy continued to be transmitted to all parts of the single currency area.”

The Times   The case for GDP-linked government bonds

The Economist    Why the euro is more durable than it looks

bloomberg   Something Has Snapped in Italy’s Stormy Relationship With Europe

bloomberg   The ECB Prepares the Way for Buying Junk Bonds

The Economist   How deep will downturns in rich countries be? 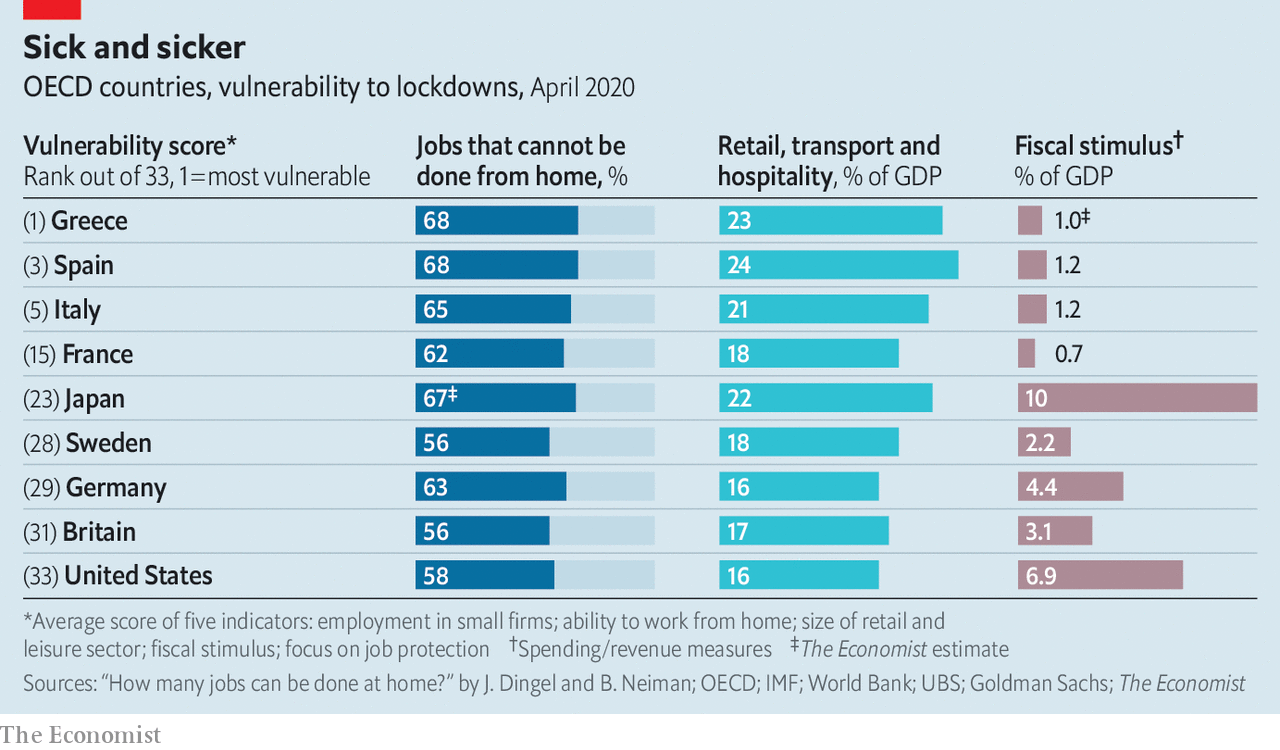 LSE blog  Eurobonds would not be costly for Northerners

capx  Could Lombardy bonds be the answer to the eurozone debt puzzle?