WASHINGTON (Reuters) – The coronavirus pandemic has significantly strengthened the market power of dominant firms, which could drag on medium-term growth and stifle innovation and investment, the International Monetary Fund said on Monday in a new research paper.  Key indicators of market power are on the rise, including price markups over marginal costs, and the concentration of revenues among the four biggest players in a sector, the IMF study said. Part of this was due to increased bankruptcies as the pandemic caused competition to fall away.  “Due to the pandemic, we estimate that this concentration could now increase in advanced economies by at least as much as it did in the 15 years to end of 2015,” IMF Managing Director Kristalina Georgieva said in a blog post accompanying the paper.  “Even in those industries that benefited from the crisis, such as the digital sector, dominant players are among the biggest winners.”

thetimes.co.uk     15/3/2021   Large companies increased their dominance over the world’s advanced economies during the pandemic and this could stifle growth, the International Monetary Fund has warned.  A study by the Washington-based institution found that big companies had increased their concentration of revenues. It said that a rise in bankruptcies, which hit smaller companies hardest, was partly to blame. 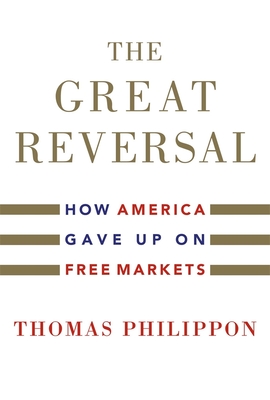 In this much-anticipated book, a leading economist argues that many key problems of the American economy are due not to the flaws of capitalism or the inevitabilities of globalization but to the concentration of corporate power. By lobbying against competition, the biggest firms drive profits higher while depressing wages and limiting opportunities for investment, innovation, and growth.

Why are cell-phone plans so much more expensive in the United States than in Europe? It seems a simple question. But the search for an answer took Thomas Philippon on an unexpected journey through some of the most complex and hotly debated issues in modern economics. Ultimately he reached his surprising conclusion: American markets, once a model for the world, are giving up on healthy competition. Sector after economic sector is more concentrated than it was twenty years ago, dominated by fewer and bigger players who lobby politicians aggressively to protect and expand their profit margins. Across the country, this drives up prices while driving down investment, productivity, growth, and wages, resulting in more inequality. Meanwhile, Europe–long dismissed for competitive sclerosis and weak antitrust–is beating America at its own game.

Philippon, one of the world’s leading economists, did not expect these conclusions in the age of Silicon Valley start-ups and millennial millionaires. But the data from his cutting-edge research proved undeniable. In this compelling tale of economic detective work, we follow him as he works out the basic facts and consequences of industry concentration in the U.S. and Europe, shows how lobbying and campaign contributions have defanged antitrust regulators, and considers what all this means for free trade, technology, and innovation. For the sake of ordinary Americans, he concludes, government needs to return to what it once did best: keeping the playing field level for competition. It’s time to make American markets great–and free–again.

Capitalism has suffered a series of mighty blows to its reputation over the past decade. The sense of a system rigged to benefit the owners of capital at the expense of workers is profound. In 2016 a survey found that more than half of young Americans no longer support capitalism. This loss of faith is dangerous, but is also warranted. Today’s capitalism does have a real problem, just not the one that protectionists and populists like to talk about. Life has become far too comfortable for some firms in the old economy, while, in the new economy, tech firms have rapidly built market power. A revolution is indeed needed—one that unleashes competition, forcing down abnormally high profits today and ensuring that innovation can thrive tomorrow.

Countries have acted to fuel competition before. At the start of the 20th century America broke up monopolies in railways and energy. After the second world war West Germany put the creation of competitive markets at the centre of its nation-building project. The establishment of the European single market, a project championed by Margaret Thatcher, prised open stale domestic markets to dynamic foreign firms. Ronald Reagan fostered competition across much of the American economy.

What is true of the airline industry is increasingly true of America’s economy. Profits have risen in most rich countries over the past ten years but the increase has been biggest for American firms. Coupled with an increasing concentration of ownership, this means the fruits of economic growth are being monopolised.

High profits across a whole economy can be a sign of sickness. They can signal the existence of firms more adept at siphoning wealth off than creating it, such as those that exploit monopolies. If companies capture more profits than they can spend, it can lead to a shortfall of demand. Ordinary people pay higher prices than they should, for worse service.

The Economist published a big article on the competitive-intensity of capitalism in 2016. It focused on America. The piece divided the economy into around 900 sectors covered by America’s five-yearly economic census. Two-thirds of them became more concentrated between 1997 and 2012. The weighted average share of the top four firms in each sector rose from 26% to 32%.

Since that article, more and more academics have become interested in the issue. The latest meeting of the world’s central bankers in Jackson Hole, Wyoming, was stuffed with sessions about how capitalism has become less competitive. Wonks are talking about how to make things better. Some favour a serious effort to remove the red tape and occupational-licensing schemes that strangle small businesses and deter new entrants. Others examine a loosening of the rules that give too much protection to some intellectual-property rights.