insights.som.yale.edu  What is ecological economics? “Robert Costanza is one of the founders of a trans-disciplinary effort to understand how economics is embedded in the broader ecosystem that supports all human activity. From this perspective, he sees both limits for economic growth and opportunities to improve long-term human well- being.” …

“If we dig precious things from the land, we will invite disaster.” Thus reads one of the Hopi prophecies which echo throughout Philip Glass’s haunting soundtrack for Koyaanisqatsi (1982). As those familiar with Godfrey Reggio’s cult film know, the title itself refers to “a state of life that calls for another way of living,” a sharply polemical framing of what otherwise appears, at first, to be a detached, objective representation of humanity’s technological encroachment upon nature. What Koyaanisqatsi pioneered still makes for exciting (and unsettling) cinema. Its cinematography, editing, tempo shifts, and music are all marshalled to the end of replicating in art how technology, as a totality of forms and methods, has drawn everything into its domination. (Here is Reggio speaking of this totalizing “environment of technology” as something more or less akin to ideology—the invisible background of existence which “is unseen and goes unquestioned.”)…

Koyaanisqatsi’s concerns, read in this way, overlap to a degree with the critical sociological project of John Bellamy Foster, Brett Clark, and Richard York—especially in their substantive compilation, The Ecological Rift: Capitalism’s War on the Earth (2010). …

And so, to refocus dialectical ecology: in between Darwin and the “New Atheists” like Richard Dawkins, who reductionistically posit the gene, rather than the environment, as a determinative element, FCY bring in evolutionary scientists like Richard Lewontin and Stephen Jay Gould to highlight the dual, interactive evolutionary interplay between the environment and the genetic. As Lewontin argued: “Evolution is not an unfolding but an historically contingent wandering pathway through the space of possibilities.”

For these scientists, the “organism is both subject and an object in the physical world,” a scientific principle which draws from and extends Marx’s dialectical materialism to evolution itself:

…. In a recent paper we explore what is needed to change knowledge production in ecology, but our arguments also have further reach. We reflected on ecology as a subject of scientific inquiry and on the research process, and argue that it needs to change. … we used the graphic reproduced below to show an example of how the growth of western scientific knowledge is rooted in colonialism. This example is about naming birds… 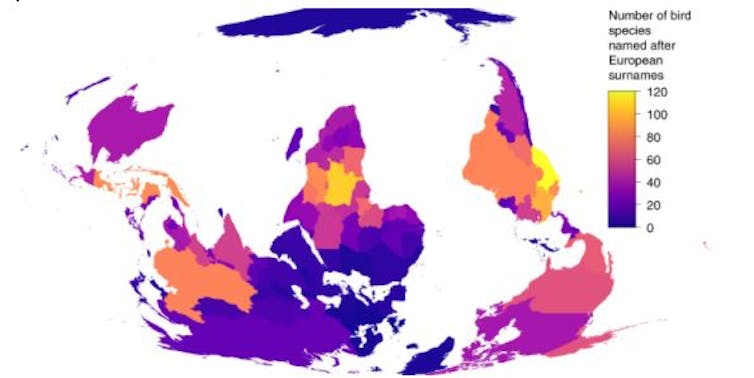 scencedirect 2007 Environmental economics and ecological economics: Where they can converge? by L.Venkatachalam

Environmental economics and ecological economics share the common objective of understanding the human–economy–environment interaction in order to redirect the economies towards sustainability. In pursuing this objective, these two perspectives utilise different types of analytical framework and are opposed to each other on many of the fundamental theoretical and methodological issues. While the environmental economics has progressed within a narrowly, but sharply, focused neoclassical analytical approach, the ecological economics has expanded by adopting a ‘diversified approach’, which led to widen the gap between the two. This article makes an attempt to highlight the divergence between these two perspectives on different issues and identifies certain research avenues that would potentially bring convergence between these two perspectives.

barnabythinks.com/ 2017 ENVIRONMENTAL ECONOMICS Vs ECOLOGICAL ECONOMICS This article investigates environmental economics and ecological economics. Debates between these two branches of economics lay at the heart of the sustainability equation.

“… this meeting also left us with the impression that a Eurocentric perspective still predominates in the reflections on livelihoods, and that in the discussions on the economy, mercantilist and monetary currents of thought predominate. Paradoxically, in its beginnings, the word economy (from the Greek Oikos; “household,” “home,” or “place to live” and nomia, management or nomos, law) had a close semantic connection with the environment, the household, and even with ecology (Oikos and logos). Furthermore, we could see that an anthropocentric positioning still dominates, even for the development of (economic) degrowth strategies. Many of these strategies are adaptations of others that, under concepts such as green economy, circular economy, climate-smart agriculture, among others, more than questioning the current economic system, perpetuate it. In any case, the results are the same: dispossession and environmental degradation.”…

theconversation.com 2019 What is ‘ecological economics’ and why do we need to talk about it? by Anitra Nelson and Brian Coffey – This article is part of a series on rebalancing the human–nature interactions that are central to the study and practice of ecological economics, which is the focus of the 2019 ANZSEE Conference in Melbourne later this month.

As environmental crises and the urgency to create ecological sustainability escalate, so does the importance of ecological economics. This applied, solutions-based field of studies is concerned with sustainability and development, rather than efficiency and growth. Also, given that cities account for 70-80% of global economic activity and associated resource use, emissions and waste, they are central to finding solutions to the challenge of sustainability.

inomics.com/blog 2019 The Case for Ecological Economics By James Matthew Alston

read GM copy of whole article here or at source