thebritishacademy.ac.uk/blog  2019  Why historians and economists should study each other’s subjects  by Maxine Berg

“The pressing issues of financial crisis, inequality and climate change call for a reformulation of current economic models. A closer integration of economics and economic history is likely to be a central part of this reformulation. For economists, there could be a new curiosity about what it means to think about actors and institutions ‘in time’, that is, historically.”

blogs.lse.ac.uk/    01/2021  Charting the long-term impact of economic ideas – The rise and fall of growth narratives by Reda Cherif, Fuad Hasanov

The ways in which academics and researchers develop narratives to operationalize key concepts in their field can have significant impacts. Taking the example of economic research, Reda Cherif and Fuad Hasanov explore the formation and diffusion of economic growth narratives and discuss what this reveals about the role of ideas in shaping socio-economic change.

“Narratives can be understood as stories that convey complex ideas or theories. They affect our worldview and influence our decisions in ways that challenge the often assumed rationality of homo economicus. Robert Shiller, Nobel laureate in Economics, emphasizes the importance of viral narratives and their impact on economic outcomes, such as the severity of a downturn, the rise and fall of cryptocurrencies, or technological unemployment. More generally, the power of narratives is apparent in politics even when based on falsehoods, monetary policy communication, financial markets’ reaction to uninformative news, and popular understandings of economic policies.

As Keynes observed: “the ideas of economists and political philosophers, both when they are right and when they are wrong, are more powerful than is commonly understood. Indeed, the world is ruled by little else.”

Distilling theories and facts through growth narratives : A central and unresolved question in economics is how to achieve growth. ” …

This is a review of economics and its relationships with other social sciences and subjects, such as philosophy, politics, maths, physics, anthropology, psychology and sociology. Also, to what extent does economics benefit from expanding into other subjects? 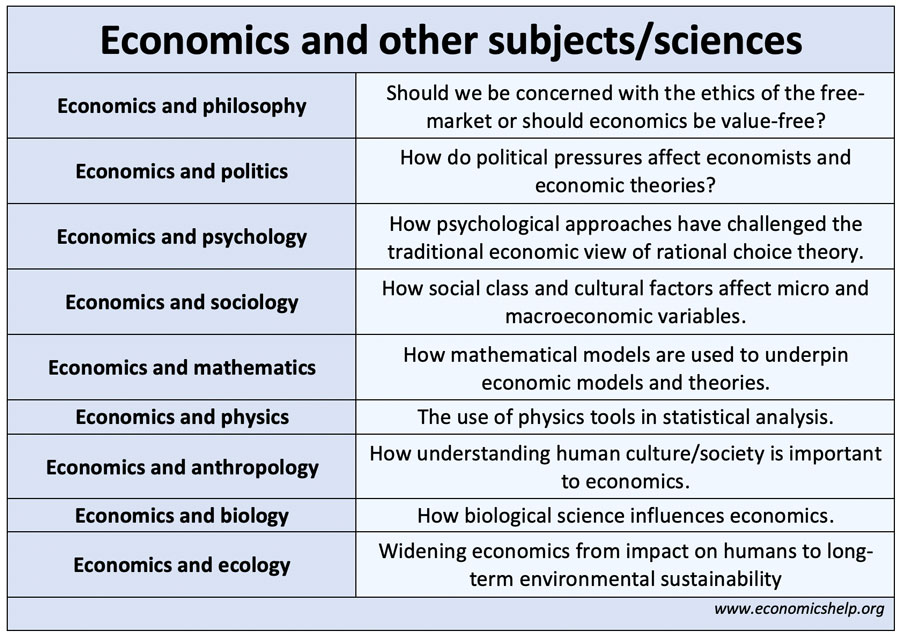 “Some economists have become wary of the influence mathematics has on economics. They argue that the innumerable variables affecting the economy can make modelling the economy on a mathematical basis prone to missing the bigger picture.

“For almost fifty years contemporary economic literature had developed too often in a totally erroneous direction with the construction of completely artificial mathematical models detached from reality; and too often it is dominated more and more by a mathematical formalism which fundamentally represents and immense regression.” [1989]

‘own interest is connected to the prosperity of society […] justice […] is the main pillar that upholds the whole edifice. If it is removed […] the immense fabric of human society […] must in a moment crumble into atoms.” (Adam Smith. link)

An Essay on the History of Economic Thought, by Israel Kirzner.

Excerpts:  The narrative arc of Kirzner’s biography of economic science is the gradual shift from the study of wealth to the logic of human action. Understanding economics as the science of wealth is of course a venerable position. Before anyone held a chair in political economy, mercantilists, physiocrats, and others had investigated the source and nature of riches. But it was Adam Smith’s work that spun off a new discipline (Chapter 2).

Deleuze among the Economists: A Short Commentary on Abderrazak Belabes’ ‘What can Economists Learn from Deleuze?’

Additionally, the section in the paper that discusses the idea that capitalism is a system that, above its unequal distribution of profit, is fundamentally a system that unevenly distributes power – is a good one and more could be said here in relation to Deleuze – for him, as mentoned above, the analysis of power in a Foucauldian sense gives way to analysis of how capitalism assembles our own subjective desires in particular ways. Some discussion of this difference might also help further the project launched by Belabes’ article here. And this might also help the target audience – other economists – think the ways in which their own affective life is wrapped up in the subject that they think most about in the particular and prescribed ways of thinking about economics generated by the history of the discipline itself.