“Despite the tremendous success of quantum physics, its interpretation remains uncertain. The brain, which is made up of neurons, which themselves are made up of molecules, is likely influenced by quantum effects. Can quantum mechanics and neuroscience be merged into a theory of “quantum consciousness”?

1  Being You: A New Science of Consciousness  by Anil Seth 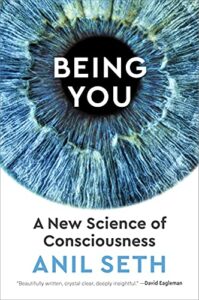 …”There have been huge advances in both psychology and neuroscience in the last twenty or thirty years that are very significant for philosophy. In the 18th century, there wasn’t a big division between what we call psychology and philosophy, and someone like David Hume quite happily moved between the two. For much of the history of the subject philosophers speculated about the mind from their armchairs without getting involved in what was happening in neuroscience. But now that would be unacceptable. Recent research in neuroscience is too dramatic to do that. It would be absurd to discuss the mind without some awareness of what has been discovered.

This is obviously relevant when thinking about consciousness.

Right. You can’t analyse consciousness from your armchair without awareness of recent findings about the brain and about human behaviour. But similarly, if you’re talking about politics and doing that in a vacuum, that seems to me a fairly meaningless pursuit about the definition of terms, rather than anything that might meaningfully connect with how we live.

I’ve deliberately chosen books that are accessible to a general reader because this is not a site for specialist academic philosophers. And obviously this is limited by the range of books that I’ve actually read. But the best writing that I’ve seen this year uses some kind of empirical evidence, whether that’s science, elements of personal biography, historical archives, or current events.

Obviously the philosophy is foregrounded, there’s a sense in which people are using arguments, building a case, and linking to the history of philosophy, but they’re not afraid to go off-piste, as it were, and draw upon other disciplines to understand the topic they are discussing better.

I think this might lead us to the first of the 2021 philosophy books that you want to recommend, which is written by a neuroscientist: Anil Seth’s Being You: A New Science of Consciousness.

Although Anil describes himself as a neuroscientist, he’s also very well read in philosophy. He uses a certain amount of autobiography in this book too — discussing the phenomenology of his own conscious life in order to illustrate points, drawing on his experience of witnessing a brain operation, and even his mother’s apparent loss of self at a certain point.

It’s a book about the nature of consciousness, one of the most intractable problems that human beings have come across. How do we understand how we, as apparently material beings made of flesh and bone—and, in particular, millions of neurones—get to the position of having qualitative experience, through the experience of the world through our senses, reflection and experience. It’s not an easy problem to unravel. The philosopher David Chalmers talks about the ‘hard problem’ of consciousness, the problem of how you get from physical matter to conscious state—how you explain what the relationship between those two is.

Seth’s approach is more pragmatic in some ways. As a neuroscientist, his view is that we should deal with what he dubs the ‘real’ problem of consciousness; there is some kind of phenomenological thing that we want to explain, but by chipping away at a range of issues that connect physical processes in the brain with certain mental states, we can try to understand the relation and gradually piece together an understanding of what we are.

His own take is that our conscious experience of the world around us is a kind of controlled hallucination created by predictions and revisions that we make. We are not passive recipients of sensory information, we project an expectation and gradually refine that through our interactions with the world. This produces some weird illusions and other phenomena when things go wrong. When things go very wrong, the loss of connection with the world means that the phenomenological experience is not something that other people necessarily share. But, in a sense, we are all hallucinating the world; none of us is getting a direct picture. We project a probable scene, but that’s tested against further sensory input, and a constructive reality emerges that is constantly refreshed. In very general terms, that’s what the book is about.

A few years ago, I interviewed Professor Dick Passingham for this site. He was one of my tutors when I studied experimental psychology. His argument was that the philosophical study of consciousness had been static for decades; only through empirical study could we possibly wrestle with this question. Neuroscience, in other words, was making the philosophy of mind obsolete. But the way you talk about this, you almost view neuroscience as a branch of applied philosophy.

It depends on the neuroscientist, I think. Anil Seth is somebody who is very philosophical in his approach, very thoughtful, and well-read in philosophy. He talks to philosophers and a range of other people interested in the mind. It would be hard not to, in the field of consciousness studies. And there are many contemporary philosophers who aren’t trained as neuroscientists, but who take neuroscience very seriously. Daniel Dennett and Patricia Churchland, for example. Both have been hugely interested in neuroscience. And in a younger generation, Keith Frankish. So there is a sense that those barriers are being broken down. I’m skeptical that philosophy will become obsolete, but it will become much more interesting through the interplay with science, in my view.

And the book is well written.

Beautifully written, easy to read, hard to put down. It’s passionate, it’s not patronising, not simplistic or anything like that. But because he’s such an elegant writer with a light touch, he knows how to get in and out of an issue and on to the next one. In some ways it reminds me of Oliver Sacks’s writing because Seth is very humane and sensitive and thoughtful as a writer. It’s a great book.

newscientist.com 5/2021 Is everything predetermined? Why physicists are reviving a taboo idea Superdeterminism makes sense of the quantum world by suggesting it is not as random as it seems, but critics say it undermines the whole premise of science. Does the idea deserve its terrible reputation? By Michael Brooks

theguardian.com/ 4/2021 The clockwork universe: is free will an illusion? – A growing chorus of scientists and philosophers argue that free will does not exist. Could they be right? – by  Oliver Burkeman

…”…Nothing could be more self-evident. And yet according to a growing chorus of philosophers and scientists, who have a variety of different reasons for their view, it also can’t possibly be the case. “This sort of free will is ruled out, simply and decisively, by the laws of physics,” says one of the most strident of the free will sceptics, the evolutionary biologist Jerry Coyne. Leading psychologists such as Steven Pinker and Paul Bloom agree, as apparently did the late Stephen Hawking, along with numerous prominent neuroscientists, including VS Ramachandran, who called free will “an inherently flawed and incoherent concept” in his endorsement of Sam Harris’s bestselling 2012 book Free Will, which also makes that argument. According to the public intellectual Yuval Noah Harari, free will is an anachronistic myth – useful in the past, perhaps, as a way of motivating people to fight against tyrants or oppressive ideologies, but rendered obsolete by the power of modern data science to know us better than we know ourselves, and thus to predict and manipulate our choices. …”…

academia.edu 2021 Revisiting Pettit’s formula for freedom in a choice Robert Donoghue
This article argues that the neo-republican ideal of freedom as non-domination suffers from prioritizing interpersonal freedom and consequently overlooks relevant threats to indi-vidual liberty that stem from structural and systemic factors. We attempt to underscore his limitation through ananalysisof Pettit’saccount of what constitutes freedom in a given choice. It will be shown that, within the non-domination account, the emphasis placed on the inter-personal dimension of liberty leads to the occlusion of other necessary requirements for achoice to be considered ‘free’. This is made clear when considering the impact of industrialconcentration in capitalist economies.

12/2020 Quantum Mechanics, the Mind-Body Problem and Negative Theology
Scientists and philosophers should keep trying to solve reality’s deepest riddles while accepting that they are unsolvable By John Horgan

Abstract : Consciousness, intentionality, and rationality are all features of the mind that philosophers have thought it difficult to account for in naturalistic terms, but it is consciousness that is often considered the most problematic. In particular, how precisely to explain the relationship of qualia, the subjective, first-person features of conscious experience, to the brain is regarded as the central part of the mind-body problem. I argue that materialism and dualism in all their forms have Wed to explain this relationship, and that their future indicates a need to rethink the conceptions of mind and matter typically presupposed by both common sense and philosophical reflection. As Bertrand Russell suggested in some neglected writings, our knowledge of the material world external to the mind is indirect, mediated by our direct awareness of qualia themselves; and what we know of that external world is really only its causal structure rather than its intrinsic nature. The common assumption that matter as it is in itself is utterly unlike mind as revealed in introspection is thus unfounded; in fact, in our introspection of qualia we are directly aware of features of the brain. Dualism thus errors in assuming the mind to exist over and above the brain, but materialism also errors, in assuming that physics and neurophysiology give us a surer grasp of the nature of the brain than does introspection. Despite its insights, the Russellian view also errors, though, in supposing that in our awareness of qualia, at least, we have a grasp of some of the intrinsic qualities of the material world. Following some leads suggested in the work of F. A. Hayek, I argue that even what we know of the internal world of the mind/brain, the sensory order of qualia, is only its structure. In the fight of the facts about the nature of our knowledge of the natures of mind and matter, the qualia problem dissolves. Ironically, however, the Hayekian position I defend also implies that the other, on the surface less problematic, features of mind, namely intentionality and rationality, are ultimately inscrutable