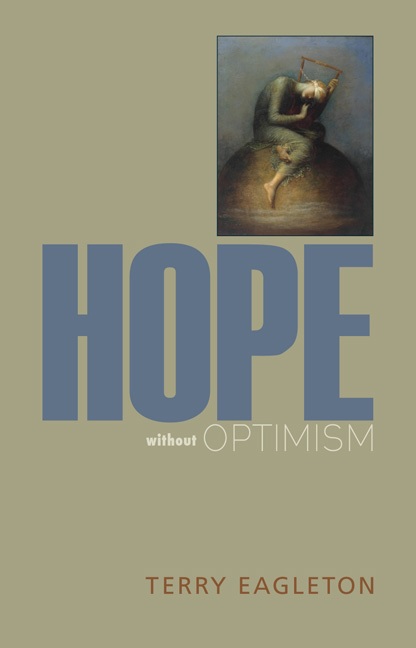 In his latest book, Terry Eagleton, one of the most celebrated intellects of our time, considers the least regarded of the virtues. His compelling meditation on hope begins with a firm rejection of the role of optimism in life’s course. Like its close relative, pessimism, it is more a system of rationalization than a reliable lens on reality, reflecting the cast of one’s temperament in place of true discernment. Eagleton turns then to hope, probing the meaning of this familiar but elusive word: Is it an emotion? How does it differ from desire? Does it fetishize the future? Finally, Eagleton broaches a new concept of tragic hope, in which this old virtue represents a strength that remains even after devastating loss has been confronted.

In a wide-ranging discussion that encompasses Shakespeare’s Lear, Kierkegaard on despair, Aquinas, Wittgenstein, St. Augustine, Kant, Walter Benjamin’s theory of history, and a long consideration of the prominent philosopher of hope, Ernst Bloch, Eagleton displays his masterful and highly creative fluency in literature, philosophy, theology, and political theory. Hope without Optimism is full of the customary wit and lucidity of this writer whose reputation rests not only on his pathbreaking ideas but on his ability to engage the reader in the urgent issues of life.

In our predicament every direct optimism is by definition a fake–the only bearers of true hope are those who dare to confront the abyss we are approaching. Hope without Optimism is the best formula of the authentic religion that fits our dark times.

For years now, Eagleton’s work has been ‘must-read’ across the board. There are theological tomes on hope but nothing that cuts so cleanly and incisively across the disciplines of literary theory, Marxist theory, politics, and theology as does this work. The final chapter is not only a brilliant piece of theology; it is also a very moving essay on what we have to hope for: if not much, still, not nothing. And the difference between something and nothing is the only difference that finally matters. Eagleton shows why that is so.

Denys Turner, Yale University, author of Faith, Reason, and the Existence of God

Optimism is woefully pre-programmed. What we need, the Marxist literary critic Terry Eagleton argues in his most recent book, Hope without Optimism, is something deeper and more reason-responsive. Enter hope…. If hope is to be more than a campaign theme or an idle fantasy, it requires an awareness of the darker aspects of life than optimists realize. But as Eagleton rightly argues, though “justice may not flourish in the end, a life devoted to the pursuit of it remains a creditable one.”

This provocative book portrays hope as a virtue, a moral orientation that can be cultivated actively, a matter of will. The book also generates hope, validating Eagleton’s conviction that hope is self-fulfilling.

[A] witty and insightful tour of hope’s complicated linguistic terrain that carefully avoids proposing some once-and-for-all grand Theory of Hope.

This is a scholarly book in many ways, and requires a clear and concentrated mind. However, Eagleton is not given to academic jargon and, like any good teacher, inserts regular doses of humor and skeptical asides. In conclusion, he underscores the necessity of hope for radical social and political change.

[A]n account of Christian hope that is at once alive to religious transcendence and committed to political emancipation…. [A] rich and lively examination of an overlooked yet much-needed virtue. 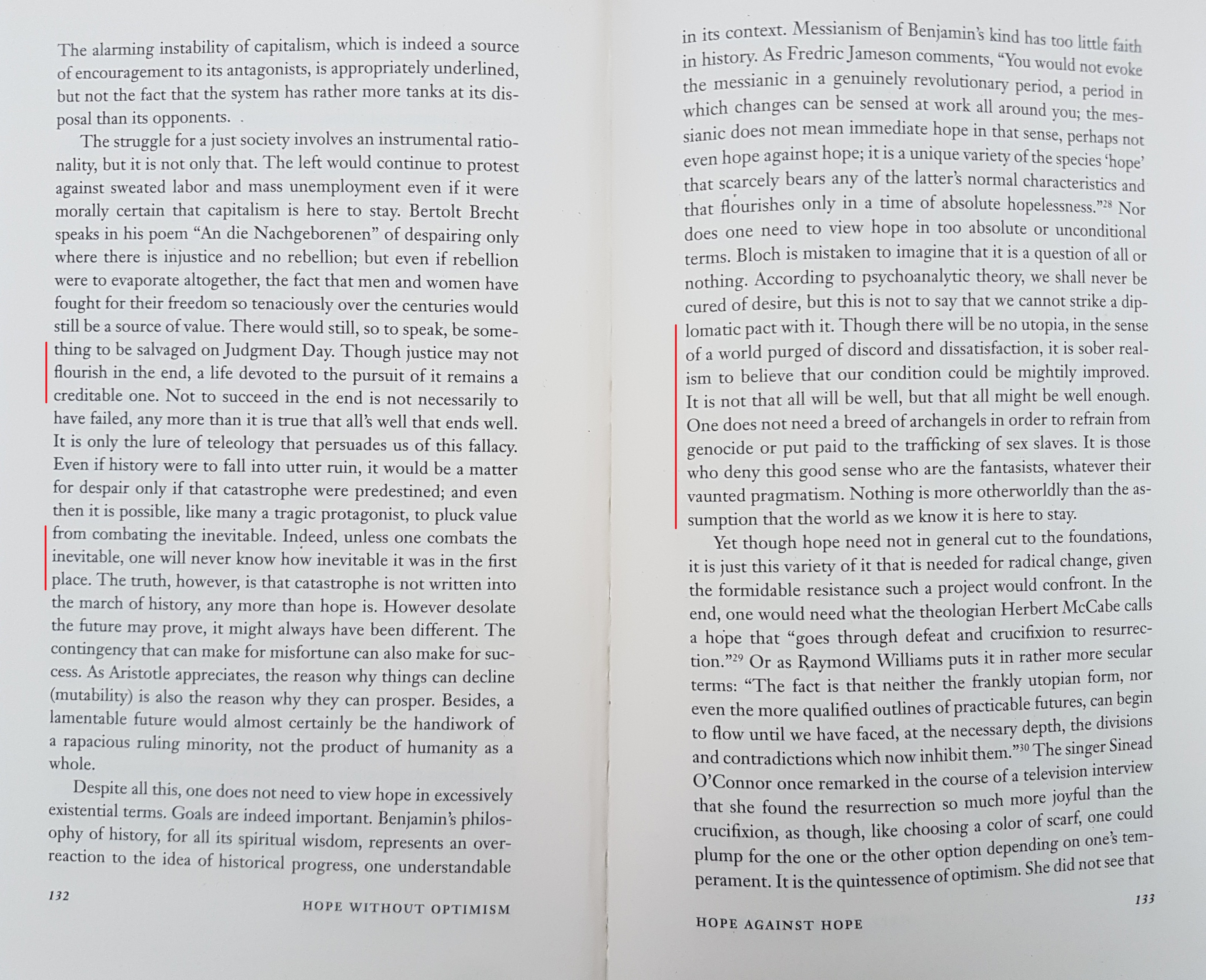 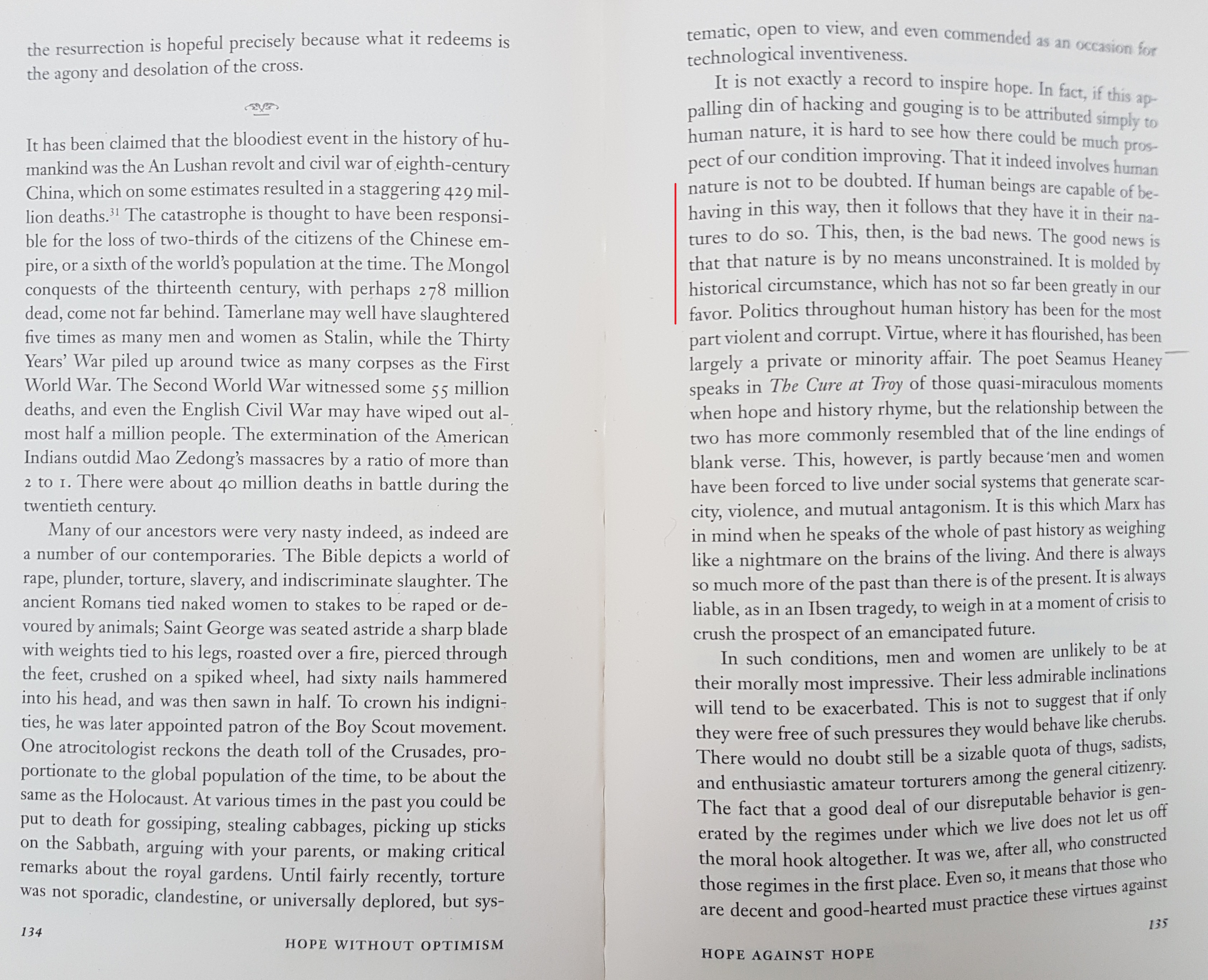 lithub.com   18/8/2021  In Praise of the Realistic Hope of Jonathan Franzen’s Endings  Jessie Gaynor on Leaving Room for the Possibility of Something Better

In Praise of the Realistic Hope of Jonathan Franzen’s Endings

…”If you’ve read Franzen’s 2019 essay on the climate apocalypse, you’ll know that he’s not one for reckless expressions of hope—unrealistic hope, as he calls it.

If you care about the planet, and about the people and animals who live on it, there are two ways to think about [climate change]. You can keep on hoping that catastrophe is preventable, and feel ever more frustrated or enraged by the world’s inaction. Or you can accept that disaster is coming, and begin to rethink what it means to have hope.”…

With the distance of two years, the essay feels much kinder than I recall people giving it credit for at the time. But then, this is my general sense of Franzen as a writer: he is realistically hopeful.

motherjones.com 12/2019 Monsters of the 2010s: Jonathan Franzen, Neo-Denialist – The elitist prick got himself anointed a climate change expert on account of liking birds. Rebecca Leber
Reporter

….”But then, at some point in the past few years, Franzen got himself anointed an authority on climate change, for reasons seemingly having to do with his birding hobby, and his snobbery took on a more sinister air. In the last decade he has published some truly terrible climate essays in The New Yorker. In one piece, published in 2015, he suggested that we prioritize preserving wilderness and wildlife over flighting climate change, because nothing can be done to help the planet. Franzen reprised the doomsday argument in 2019: “The climate apocalypse is coming. To prepare for it, we need to admit that we can’t prevent it.” We’re indeed in worse shape than most people imagine to adapt and prepare for climate change, but Franzen dismisses attempts to avert the worst of warming as too little, too late, and in doing so misunderstands that the impacts of climate change over the next century depend precisely on what we do now. Who bears the heaviest costs of climate disaster, and how, and when? These questions are still up for grabs. Franzen’s answer is more or less, “Who cares?”

Here was the old elitism masquerading as clear-eyed fatalism. Franzen believes there is something in our dumb brute nature—not his, mind you, but just about everyone else’s—preventing us from fixing the planet, that the only battles worth fighting now are “smaller, more local battles.” This was rich stuff, in all senses of the word, a game plan for climate action bearing all the marks of Franzen’s class, one that seeks to preserve his leisurely hobbies while writing off the suffering of others. As a wealthy white man, he is shielded from the worst immediate effects of climate change but not from, say, the impact of any mass mobilization on the order of the Green New Deal. Franzen’s climate parochialism is a way of coping with the moral imperative to do something that doesn’t put his privilege in any sort of jeopardy.

The glasses heist ended happily for the author, by the way. Police helicopters were dispatched, and the culprit was apprehended. (Franzen did not press charges.) Later, for British GQ, the bandit recounted the theft and escape, how he waded into a lake only to lose his stolen copy of Franzen’s new novel in the water. A nice little parable for our decade—the state whirring into action so that a rich asshole might get his glasses back, all while Freedom floats just out of reach.