“…  The paper recollects the main features of Minsky’s financial instability hypothesis that became so popular in the aftermath of the failure of Lehman’s Brothers despite having been totally ignored by mainstream economists until then. It also recalls other important contributions of Minsky to our understanding of a monetized production economy, some of which were quite premonitory. In the second part of the paper, the author mentions what can be considered as weaknesses of Minsky’s theoretical framework, which should be avoided in future work. The third part deals with the controversial issue of whether or not Minsky was a post-Keynesian, or considered himself to be part of the post-Keynesian school of thought. The author concludes that indeed Minsky clearly stood in the post-Keynesian camp. …

… a number of authors have shown the similar visions of Minsky and Schumpeter, with both seeing capitalism as an evolutionary process, associated with disequilibria rather than equilibrium, and with bank credit playing a fundamental role (Ülgen 2014). According to O’Hara (2007), Minsky’s work, notably his financial instability hypothesis, sometimes also called the financial fragility hypothesis, is a major source of convergence among heterodox economists and is at the heart of what he calls Institutional-Evolutionary Political Economy. Minsky has also attracted the attention of Marxian or Radical economists. Minsky’s claim, that financial crises are unavoidable although it may take a long time for the crisis to occur, with stability hiding destabilizing processes, reminds these economists of Marx’s dialectics or of the tendency of the falling rate of profit and its inevitable, but difficult to predict, real economy crisis (Dymski and Pollin 1992). …”                             Read article here 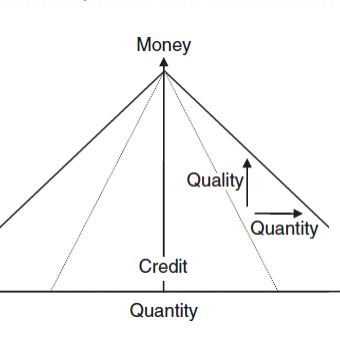 The first reading will be  Daniel H. Neilson’s    book on Hyman Minsky, in which he explores his intellectual formation from his mentors Joseph Schumpeter and Robert Simons from his graduate studies at Harvard. He shows how Minsky emphasized the central importance of finance to capitalism and the centrality of making payments (the survival contraint) to the functioning of the economy.

” … Neilson portrays how Minsky, though fluent in the mathematical rigours of mainstream neoclassical economics, chose to stay on the margins precisely because he thought payment was too important to ignore. Mainstream economics was modelled on the barter myth, where people exchanged in goods. Money enters this model as neutral grease to the wheels of exchange. Minsky knew better, seeing how money is not always available, and how its abundance or scarcity actively drives economic activity. The nominal, not the real, is what counts. …

By narrating Minsky’s theoretical developments in their historical context, Neilson introduces with clarity a body of economic thought that has become very influential in the last decade. The focus on central banks, debates about MMT, and the way terms like ‘collateral’ and ‘liquidity’ have become so commonplace in public economic discourse today is testament to Minsky’s focus on the problem of payment. …

The focus on payment also brings another often-overlooked institution to light. The money market upon which banks access the means of payment, and one particularly important part called the repurchase (or ‘repo’) market. …

Yet for all that he was a renegade, Minsky was still an economist. What even Neilson’s radical interpretation of Minsky still can’t help us to understand is the social purpose of financiers, and why the sector directs credit so abundantly to some and so scarcely to others.

Yet implied in Minsky’s priority of liquidity over solvency is the fact that what is politically protected – through central bank interventions that guarantee liquidity – can live forever. We know the investment in the green transition to a sustainable future is essential. We know that it will, in time, yield returns that vastly outweigh costs of today. Yet green investment remains stubbornly low, and firms unable to make payment today are having to ignore the necessities tomorrow will bring.

Perhaps central banks could choose to extend liquidity not just to mortgage securities and treasury bills but to the developers of green infrastructure and their debts. In 2019, the UN estimated $1.7 trillion a year was needed to finance a Global Green New Deal and drive the energy transition. Little of it has been forthcoming. In the last weeks though, the US committed to a fiscal stimulus of $2 trillion and the G20 a global economic recovery plan of $5 trillion. Fiscal heft has been backed up by monetary financing in the US, UK, Japan and EU.

Neilson’s crucial book allows us to understand the mechanics of how this happens, even if it can’t answer why.”